Why I Moved to a Surface RT 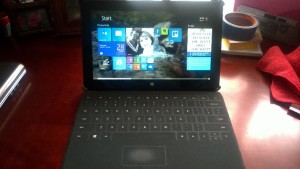 [dropcap]W[/dropcap]hen I first started looking at tablets they were so expensive I really needed to justify my purchase. I wanted something compact, light and portable. It needed to work for my, not just the latest fun gadget. I did a lot of research to find the apps that would help me work with Word and documents, take quick notes, synchronize my calendar contacts and files. After finding out it could do what I needed, I broke down and purchased an iPad 1. It worked for a few years until the next generation iPad was released and the apps started to run slow. I just could take it anymore so it was time for an upgrade. I really wasn’t sure if I wanted another iPad so it was time for round 2 of research. Should I go to an iPad 3 or should I go with an Android or look there is this Microsoft tablet coming out called a Surface.

I upgraded my laptop my computer from Windows 7 to Windows 8 and was really impressed with it even though I didn’t have a touch screen. I thought, if this is was it’s like on a laptop then it has to be pretty good on a tablet. So then it was time to wait for me to get my hands on one at a store. I went to the local Best Buy to play with one and loved it. I also realized that it most likely wouldn’t have all the apps I as used to on the iPad because it was a new OS but it does everything I want and more.  A full version of Microsoft Office, Skydrive and most of the popular social network apps. Even if the apps were not available, it has a full web browser I can use. What more could I ask for.

So I took the plunge and purchased one. I purchased the Surface RT because I had a full laptop for full applications and the battery life of the pro version wasn’t impressive. Once I started using it, I was really happy and realized I made the right choice.

More to come in future posts.